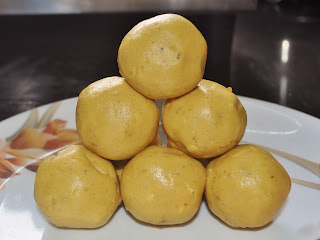 Hummus! One of my favourite words of all time, and the only use for chickpeas that I could conceive of before I moved to India. Oh, how ignorant I was! Because, much as I love hummus and pita bread, I have now discovered the true destiny of the chickpea - the Besan Laddoo.


Laddoos are ball-shaped sweets, often served at festive occasions. Besan (gram flour) is powdered chickpeas, which admittedly doesn't sound very appetising. But when roasted, the slightly bitter, vegetative taste of the besan gives way to a wonderfully nutty, and ever so slightly sweet, flavour. And when you combine this with the right amount of ghee, sugar, and spices, you end up with something that resembles damp sand but tastes superb. For me, the just-warm mixture has the same appeal as cake batter or cookie dough - it takes a lot of self control to roll it into laddoos.

Enough gushing. There are various recipes for besan laddoos. Cardamom is the spice most commonly used; cinnamon and nutmeg also make an occasional appearance. But I have found that a generous pinch of saffron adds a certain something to the flavour, as do a few sliced dates. Here is my recipe, inspired by this recipe by Anushruti RK. I highly recommend watching her video before you start, as the method is pretty much the same. 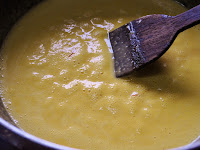 1. Heat the ghee over a low flame in a large non-stick pan, for example a wok. Stir in 2 cups of besan, along with the saffron strands, and roast, stirring continuously, for 20 minutes or so. The mixture should have the consistency of melted chocolate. It will darken a little as it roasts, and will smell delicious. If it begins to burn, it will start to smell pungent. 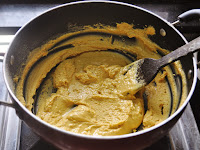 2. Stir in as much of the remaining besan as you require. The mixture should thicken and become slightly sticky. Cook for 8 to 10 minutes, or more. 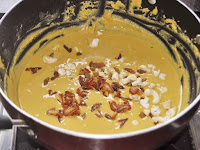 3. Remove the pan from the heat. Add the cashews, dates and raisins, and stir for a few more minutes while the besan and dry fruits roast in the hot ghee. Once you are confident that it will not burn, stir in the cinnamon powder and leave the mixture to cool to room temperature. 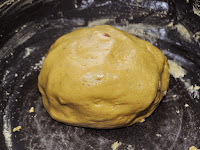 4. Once the mixture is cool, mix in the sugar and cardamom with your fingers. Add in a little at a time, breaking up any sugar lumps. 2 cups of sugar is approximate - you may not need all of it, or you may need extra if it is still too loose. Test it by pinching off a small portion and rolling it into a ball - the ball should keep its shape nicely. Taste it and adjust the spices accordingly, but resist the temptation to keep eating it! 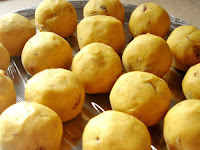 5. Roll the mixture into balls, and arrange in a box or plate lined with greaseproof paper.